First results from the HAAWAII project where re-used in the industrial research solution 96 of the SESAR-2 project PJ.10. A pre-validation task was performed on 10th of December 2021 in DLR’s ATMOS simulator in Braunschweig with an air traffic controller (ATCO) from Austro Control.

HAAWAII developed online speech recognition for ATM applications. Online recognition means, that the speech recognizer starts the recognition process when the air traffic controller presses the push-to-talk button. The callsign, if provided in the beginning of the utterance, is already recognized before the whole utterance is spoken. The following figure shows the output in the aircraft radar labels of the radar screen, when the air traffic controller says: “russia six six zero four descend seven thousand feet on QNH one zero zero four with two thousand five hundred feet or greater” 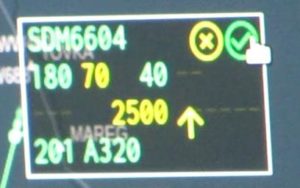 When the words “russia six six zero four descend” are recognized the callsign SDM6604 is highlighted by a white frame aground the label. When “descend seven thousand feet on QNH” is recognized the target value of 70 (skipping the last two zeros) is shown in the radar label. When the full utterances is recognized and the push to talk button is released the descent rate of 2500 feet plus an arrow (for “or greater”) is also shown. The ATCO gets the possibility to accept the whole recognition by clicking on the green check mark or rejecting everything by clicking on the yellow cross. In the latter case, (s)he needs to manually input all the given values.

Currently the Solution 96 team is evaluating the command extraction rates with special focus on the error rate due to online recognition, i.e. how often an intermediate callsign and command extraction was different from the final ones.